I used to think that an egg-white omelette couldn't be as good as the real thing. I was totally wrong.

This omelet is fluffy and delicious. The addition of veggies greatly enhances it. And it's ready in just 20 minutes!

This fluffy omelet is so easy to make and it tastes so good! It's quickly become one of my favorite breakfasts.

I don't normally shy away from egg yolks. But sometimes a recipe - such as this baked chocolate custard - calls for yolks only. Then I am left with extra egg whites. This recipe is the perfect way to use them up.

You'll only need a few simple ingredients to make this tasty omelette. The exact measurements are listed in the recipe card below. Here's an overview of what you'll need:

Egg whites: I use four large egg whites in this recipe. You can use fresh egg whites or egg whites from a carton. But fresh ones taste better.

Kosher salt and black pepper: If using fine salt, you should reduce the amount you use, or the omelet could end up too salty.

Olive oil spray: For the pan. You can also use butter.

Parmesan cheese: I prefer to use finely grated parmesan and not coarsely shredded.

Making an egg white omelette is easy! Scroll down to the recipe card for detailed instructions. Here are the basic steps:

Whisk the egg whites with salt, pepper, and garlic powder until frothy. Whisk in the parmesan.

Fold the green onions and tomatoes into the egg whites.

Cook the omelet in olive oil. The idea is to pour the mixture into the warm skillet, allow the edges to set, then very gently and repeatedly lift the edges to allow uncooked eggs to get to the bottom, where they'll cook faster.

When the bottom of the omelet is cooked and the top is not runny anymore but still wet, carefully flip the omelet.

Fold the omelet in two, slide it into a plate, and serve.

I like to incorporate the vegetables into the eggs rather than cook them separately and stuff the cooked eggs with the filling.

I also like to flip my omelet before folding it, to make sure it's thoroughly cooked on both sides.

Sometimes I reserve the parmesan for the end and sprinkle it on top of the fully cooked omelet. But more often than not, I just mix it into the raw egg whites

How do you flip an omelet?

I envy professional cooks who have mastered the technique of flipping an omelet with a quick motion of their wrist. I am a home cook, so my methods are not as impressive.

One way to flip the omelette is to use two wide spatulas. But this sometimes results in the omelet getting torn.

Another way to do it, the one I demonstrate in the video below, is to place a heatproof plate on top of the skillet, then invert the omelet into the plate, and then slide it back onto the skillet, cooked side up.

How do you make the omelet fluffy?

To make sure your omelet is fluffy, beat the egg whites well, and patiently cook the omelet on medium-low heat.

Can I use egg whites from a carton?

Yes, you can. But fresh egg whites will taste better and will also give you a fluffier omelet.

An egg white omelette is not as flavorful as one made with whole eggs, so it's a good idea to add tasty fillings.

As you can see in the ingredients list above, I like to use scallions, cherry tomatoes, and parmesan.

But you can obviously use whatever you like, including onions, olives, mushrooms, and bell peppers. Feta cheese is also very good in this recipe instead of parmesan, and so is sharp cheddar.

This omelet is wonderful all by itself! But if you want something on the side, good options are almond flour biscuits or keto cheese muffins. You can also make a tasty sandwich using almond flour bread.

I have a couple more egg white recipes that I think you'll like. Both are filling, tasty, and very easy to make: 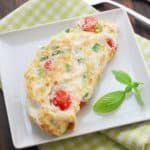 I used to think that an egg-white omelet couldn't be as good as a "real" one. I was wrong. This omelet is golden and so delicious!
Prep Time10 mins
Cook Time10 mins
Total Time20 mins
Course: Breakfast
Cuisine: American
Servings: 1 omelet
Calories: 149kcal
Author: Vered DeLeeuw