This coconut flour pizza crust is the best gluten-free and keto crust I’ve ever tried. It’s soft and tasty, and sturdy enough to hold with your hands!

OMG OMG OMG! You have to make this pizza crust! It is now my favorite gluten-free and keto pizza crust. It's very easy to make, and it's unbelievably good. 🍕

I've been wondering about coconut flour pizza crust for a while now. But I assumed it wouldn't work since coconut flour is quite sweet. I finally decided to give it a try. And I am so glad that I did! This is the best gluten-free and keto pizza crust I've ever tried. It's soft, but not too soft, so you can easily hold it with your hands.

But the best part: it's delicious! The seasonings mask the inherent sweetness of the coconut. So the result is a pleasantly savory crust that goes wonderfully with the toppings. And while it's a bit more calorie-dense than cauliflower pizza crust, the better texture is worth it.

You'll only need a few ingredients to make this tasty low-carb pizza crust. The exact measurements are included in the recipe card below. Here's an overview of what you'll need:

Olive oil spray: I use it to grease the pizza pans.

Eggs: I use large eggs in most of my recipes, this one included.

Water: To thin out the mixture.

Coconut flour: An excellent flour substitute. Since it's so extremely absorbent, it's best to measure it by weight and not by volume. Each gram counts!

Grated parmesan cheese: Make sure you use finely grated cheese and not coarsely shredded.

Toppings: Marinara sauce (try to use a sugar-free sauce such as Rao's) and shredded mozzarella.

How to make coconut flour pizza crust? It's easy! Scroll down to the recipe card for the detailed instructions. Here are the basic steps:

Prepare your pans. Line two pizza pans with parchment paper circles and spray them with olive oil. You can also make these pizzas side by side on a single, large baking sheet. Or just make one large rectangular pizza!

Shape the crusts. Using a rubber spatula, transfer half of the mixture into each of the prepared pans. Use a spatula to spread it out evenly into an 8-inch circle.

Bake. Bake the crusts until set and the edges are beginning to brown, about 15 minutes in a 400°F oven.

Top the pizzas. Remove the pizzas from the oven. Spread each pizza with half the pizza sauce, sprinkle with half the shredded mozzarella, and add any other toppings you like. Return the pizzas to the oven and bake them until the cheese is melted and the crust is golden brown, about 5 minutes.

When it comes to toppings, you can use whatever you like. The only caveat: this crust is more delicate than a traditional crust, so try not to pile too many toppings on your pizza.

I like to serve this pizza with the simplest side salad. Good options include arugula salad, tomato salad, and cucumber salad. It's also good with a side of steamed broccoli or microwave broccoli.

If you'd like to recreate a pizza takeout experience, you can also serve this pizza with baked wings or buffalo wings, fresh-cut veggies, and blue cheese dressing.

Is coconut flour crust the same as regular pizza crust?

It's not, but it's close. My favorite thing about this crust is that it's so similar to a real doughy crust. It's not exactly the same, of course. But it's truly the closest I was able to find while keeping carbs in check.

What is better to bake with, almond flour or coconut flour?

Both have their place in low-carb and gluten-free baking. It's more challenging to work with coconut flour because it's extremely absorbent, which can be drying. But if you add enough eggs and liquids, that's not really an issue.
When it comes to pizza crust, although I also make one with almond flour, I prefer the one made with coconut flour. I find that it's closer to a traditional crust.

Is pizza OK on keto?

It can be OK if you use a low-carb crust made with cauliflower, almond flour, or coconut flour. There are also keto crusts made with ground beef or with shredded cooked chicken.

You can keep leftovers of this pizza, although they won't be as good as when made fresh. Keep them in the fridge, in an airtight container, for up to 4 days. It's best to reheat them in a low oven (250°F) or in a toaster oven on a low setting, although the microwave will also work in a pinch.

On Instagram, Rachel posted a gorgeous photo of her creation. She says, "Don't have almond flour? Ran out of enough mozzarella to make fathead dough? Well, you can still have a pizza made the keto way. The recipe I used is from @yumhealth. With just coconut flour, eggs, and parmesan cheese I was able to make this soft thin-crust pizza."

I typically publish a new recipe once a week. Want the new recipes in your inbox? Subscribe! 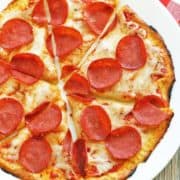 Rather than dividing the dough into two pizzas, you can bake one large rectangular pizza on a parchment-lined rimmed baking sheet.
NUTRITION INFO Most of our recipes are low-carb (or keto) and gluten-free, but some are not. Please verify that a recipe fits your needs before using it. Recommended and linked products are not guaranteed to be gluten-free. Nutrition info is approximate and may contain errors, so you should independently verify it. It is calculated using the SparkPeople.com recipe calculator and the carb count excludes sugar alcohols. Please read the disclaimers in our Terms of Use carefully before using any of our recipes.
Serving: 1pizza | Calories: 507kcal | Carbohydrates: 16g | Protein: 36g | Fat: 33g | Saturated Fat: 14g | Sodium: 867mg | Fiber: 6g | Sugar: 6g
NEVER MISS A RECIPE! I typically publish a new or updated recipe once a week. Want them in your inbox? Subscribe!

Vered DeLeeuw, LL.M., CNC, has been following a low-carb real-food diet and blogging about it since 2011. She's a Certified Nutrition Coach (NASM-CNC), has taken courses at the Harvard School of Public Health, and has earned a Nutrition and Healthy Living Certificate from Cornell University. Her work has appeared in several major media outlets, including Healthline, HuffPost, Today, Women's Health, Shape, and Country Living. Click to learn more about Vered.
Previous Post: « Shirataki Sesame Noodles
Next Post: Baked Chicken Wings »