Refreshing creamy cucumber salad is made with sour cream, vinegar, and dill. It's the perfect summer side dish, and you can make it ahead of time and chill it until ready to serve.

This tasty salad is one of the summer's little pleasures. Much like cold watermelon, fresh raspberries, and chilled soups (such as gazpacho).

The combination of cucumbers and sour cream is a classic one. And when you add vinegar and dill, you get a wonderfully flavorful salad that goes nicely with a wide variety of meals.

You'll only need a few simple ingredients to make this refreshing cucumber salad. The exact measurements are listed in the recipe card below. Here's an overview of what you'll need:

Sour cream: I recommend using full-fat sour cream in this recipe. I tried it once with Greek yogurt and felt it was a bit too tangy.

Dill weed: I know that some people really dislike this herb. If you're one of them, simply omit it. Or add a bit of fresh parsley instead. If you like dill, please use it! It adds a wonderful layer of flavor to this salad.

Cucumber: It's best (but not mandatory) to use firm English cucumbers.

Red onion: Try to slice it thinly. It's not as sharp as white or yellow onions, but you still don't want to bite into big chunks of it.

Kosher salt and black pepper: If using fine salt, you should reduce the amount you use, or the salad could end up too salty.

How to make a creamy cucumber salad? It's the simplest salad, really. Scroll down to the recipe card for the details. Here are the basic steps:

Cucumber and onion slices are mixed with a simple dressing of sour cream, vinegar, and salt.

Then they are allowed to macerate in the fridge for a few hours.

That's it! And the result is incredible. Tasty, refreshing, and the perfect side to grilled meats and seafood.

My dad, who is Dutch, used to make a different version of this recipe ("komkommersalade" in Dutch) when I was a kid. He made his cucumber salad with a mixture of oil, vinegar, sugar, and salt. Probably also dill, if I remember correctly.

He allowed his salad to macerate in the fridge overnight and it was such a treat! One of my favorite side dishes for sure.

I loved dad's salad as a kid (I really should get the recipe from him). But I love the creaminess of this version just as much.

There's something about the combination of cucumbers and sour cream. The cucumbers are cool and fresh, the sour cream rich and creamy.

Can I omit the dill?

Sure! Although dill greatly enhances the flavor of this salad, if you don't like it, you can certainly omit it. Try adding chopped cilantro instead, or - for a milder flavor - chopped parsley.

Can I use Greek yogurt instead of sour cream?

Yes. Plain Greek yogurt will work. But it won't be as tasty, in my opinion. Greek yogurt has more tang and less fat than sour cream, making it not as flavorful.
If you use reduced-fat Greek yogurt, I recommend adding a tablespoon of light olive oil to the dressing.

Can you make this cucumber salad with mayonnaise?

Sure. You can replace the sour cream in this recipe with mayonnaise if you prefer. Or use half sour cream and half mayonnaise.

What are English cucumbers?

It's such a versatile side dish that goes with anything, really. I often serve it as an easy side to any of the following main dishes:

You can keep this salad in the fridge for 3-4 days, in an airtight container. Mix it again before serving. I find it actually tastes better the second day, after the flavors have had a chance to meld. 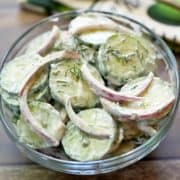 English cucumbers are the elongated cucumbers that come wrapped in plastic to protect their unwaxed skin. They have fewer seeds than regular cucumbers and they are firmer and not as watery. If you can't get English cucumbers, regular cucumbers are fine.
DISCLAIMER Most of our recipes are low-carb (or keto) and gluten-free, but some are not. Please verify that a recipe fits your needs before using it. Recommended and linked products are not guaranteed to be gluten-free. Nutrition info is approximate and may contain errors, so you should independently verify it. It is calculated using the SparkPeople.com recipe calculator and the carb count excludes sugar alcohols. Please read the disclaimers in our Terms of Use carefully before using any of our recipes.