Stuffed portobello mushrooms are delicious and so pretty. They work well as an appetizer, or you can serve them as a tasty side dish.

Leftovers keep well in the fridge for several days, so sometimes I double the recipe and make a few extra.

I love portobellos. They are so tasty, and they are also substantial - almost meaty. I like their bold flavor and dense texture. I enjoy them simply grilled, but filling them with things is especially fun!

This recipe is wonderful. The portobello mushrooms are stuffed with a delicious mixture of spinach, onions, garlic, and parmesan. They're tasty, pretty, and surprisingly easy to make.

You'll only need a few simple ingredients to make this tasty portobello mushroom recipe. The exact measurements are listed in the recipe card below. Here's an overview of what you'll need:

Portobello mushrooms: Try to find mushrooms that aren't too shallow or too deep. You want them to perfectly showcase the filling.

Olive oil cooking spray: I find that spray is convenient. But you can simply brush them with olive oil.

Kosher salt and black pepper: I use kosher salt in most of my recipes. If using fine salt, you should use less of it.

Frozen chopped spinach: I haven't tried making this recipe with fresh spinach. Frozen is convenient, as I always have a bag in the freezer.

Olive oil: For cooking the filling. You can use butter instead if you'd like.

Aromatics: Onion and garlic. I'm lazy, so I chop the onion in the food processor and use jarred minced garlic. But if you have the patience, freshly minced garlic cloves will taste better.

Grated Parmesan: Make sure you use finely grated parmesan and not coarsely shredded.

Making stuffed portobello mushrooms is surprisingly easy. Scroll down to the recipe card for the details. Here are the basic steps:

Prep the mushrooms. You'll want to wipe them clean, then remove the stem and gills.

Pre-broil. Spray the mushrooms with olive oil, season them with salt and pepper, then briefly broil them.

Saute. Your next step is to defrost frozen chopped spinach, drain it well, and then saute it with onions and garlic in some olive oil.

Stuff. Mix in Parmesan, then stuff the mixture into the mushrooms.

Broil. Finish by broiling briefly, just until the filling is golden.

I can't stress strongly enough how important it is to thoroughly drain the defrosted spinach. You want no traces of water left! So place it in a colander and press on it repeatedly with the back of a large spoon, until no water comes out.

How do I prevent mushrooms from being soggy?

1. Wipe clean, don't wash the mushrooms - they absorb water.
2. Briefly broil the mushrooms to release some of their water content.
3. In the final stage of broiling, broil briefly, just until the filling is browned. Broiling for too long will result in mushy mushrooms that have released their liquid into your filling.

But even if that happens, you can still salvage the dish. Carefully drain the liquid, and place the mushrooms on paper towels to soak as much of the liquid as you can.

Should I scrape out the mushrooms' gills?

Yes. Scraping out the gills makes room for the filling, improves the mushrooms' texture, and helps reduce excess water.

The mushrooms will still release quite a bit of water as you broil them, so once they're done, place them upside down on paper towels to drain.

Should I wash portobello mushrooms before cooking?

As mentioned above, I prefer to wipe them clean with a damp paper towel. Mushrooms are porous, and if you wash them, they'll absorb water and turn out soggy.

If you'd rather wash them, do so briefly, and dry them immediately.

These tasty mushrooms make a great appetizer or side dish if you serve one per person. I often serve them with broiled salmon.

Or you can serve two per person with a couple of fried or poached eggs, for a tasty and filling meatless meal. 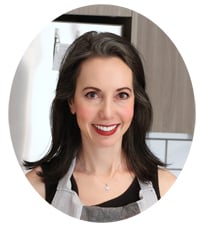