Have you tried wrapping pork tenderloin in bacon? It's life-changing. The bacon adds flavor and fat to the lean meat, making it juicy and flavorful.

It's such an easy recipe to make yet it looks so impressive! Leftovers are good too, so you can make a couple of them to ensure tasty leftovers.

Bacon really does make everything better. 🥓 In this particular recipe, it adds juiciness and flavor that the naturally lean pork tenderloin lacks. Wrapping the pork in bacon does more than enhancing the flavor. It also ensures that the meat stays nice and juicy.

My roasted pork tenderloin is juicy and very flavorful, but I think this recipe is even better, and my family agrees - it's one of the dinner entrees they request most often! I'm actually happy to oblige since it's a truly easy recipe.

You'll only need a few simple ingredients to make this tasty main dish. The exact measurements are included in the recipe card below. Here's an overview of what you'll need:

Olive oil spray: I love this delicious oil! But if you're unsure about cooking with it, you can use avocado oil instead. It has a higher smoke point.

Honey: You can try replacing this with a sugar-free sticky sweetener. But I think the real thing is worth it.

Dijon mustard: It's creamier and less vinegary than yellow mustard.

Seasonings: I keep it simple and use kosher salt, black pepper, and garlic powder.

Pork tenderloin: I usually get a piece that weighs around 1.25 lb. They can sometimes go up to 1.5 lb. and then you would need to roast for a little longer.

Bacon strips: Try to pick medium bacon slices - not thick and not thin.

Despite the impressive presentation, making bacon-wrapped pork tenderloin is easy. Scroll down to the recipe card for detailed instructions. Here are the basic steps:

2. Prepare the pork. Season the pork, then wrap it in bacon, as shown in the video below. Brush the top and sides with half the glaze.

3. Cook the pork. Roast it to medium doneness, about 40 minutes in a 450°F oven. Loosely cover it with foil after the first 15 minutes. Otherwise, the bacon will burn.

4. Rest it before slicing. Let the meat rest, then brush it with the remaining glaze, slice, and serve.

You'll see in the recipe card below that I cook the pork to 145°F (medium doneness).

A wonderful thing happened a few years ago. The USDA lowered its safe temperature for whole cuts of pork (not ground pork) from 160°F to 145°F, with a 3-minute rest period.

So thankfully, we can now cook whole cuts of pork to a wonderfully juicy, slightly pink medium temperature. There's no need to dry them out completely!

Is it OK if cooked pork is pink in the middle?

Yes! As explained above, it is now considered acceptable to cook whole cuts of pork to an internal temperature of 145°F, which means the meat will be slightly pink. Ground pork, however, should still be cooked to 160ºF.

Should I cook pork tenderloin covered?

Since I cook it in a very hot oven (450ºF), I do find that it's best to loosely cover it with foil after the first 15-20 minutes, to protect the top and prevent it from burning.

How do you keep pork tenderloin from drying out?

I have found that it's best to cook it in a hot oven for a relatively short time, rather than use a moderate oven and cook it for longer. And another great way to keep it juicy is to wrap it in bacon!

If I feel like varying the basic recipe, I'll usually sprinkle the pork with a few more spices prior to wrapping it. Good options include paprika, cumin, and dried thyme.

One of the reasons I love making this recipe is that it goes well with many different sides. But since I cook it in a 450ºF oven, I like to serve it with a side dish that I can cook in the same oven, such as:

You can keep the leftovers in the fridge, in an airtight container, for 3-4 days. Reheat them covered in the microwave on 50% power. The bacon will lose its crispiness, but the leftovers should still taste good. 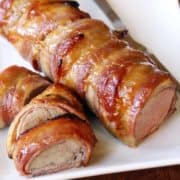 A few years ago, the USDA lowered its safe temperature for whole cuts of pork (not ground pork) from 160°F to 145°F, with a 3-minute rest period. So thankfully, we can now cook whole cuts of pork to a wonderfully juicy, slightly pink medium temperature. There's no need to dry them out completely!
DISCLAIMER Most of our recipes are low-carb (or keto) and gluten-free, but some are not. Please verify that a recipe fits your needs before using it. Recommended and linked products are not guaranteed to be gluten-free. Nutrition info is approximate and may contain errors, so you should independently verify it. It is calculated using the SparkPeople.com recipe calculator and the carb count excludes sugar alcohols. Please read the disclaimers in our Terms of Use carefully before using any of our recipes.