A fiesta of flavors and colors, these oven-baked, chicken stuffed poblano peppers are super flavorful, absolutely gorgeous, and surprisingly easy to make.

I often make a double batch of them, because even the leftovers are really good!

I adore Mexican cuisine. It's bursting with flavor! I love the liberal use of spices and especially peppers, and I enjoy the fact that many of the traditional dishes are at least moderately spicy.

These stuffed poblano peppers did not disappoint. They are super flavorful and I also like the way they look. The combination of peppers, shredded chicken and melted cheese is phenomenal. And while it may look like a complex recipe to make, it's actually quite easy, especially if you use pre-cooked chicken.

You'll only need a few simple ingredients to make these tasty stuffed poblanos. The full list and the exact measurements are included in the recipe card below. Here's an overview and some comments:

Olive oil: I love cooking with this flavorful oil. You can also use avocado oil, which has a higher smoke point and a neutral flavor.

Poblano peppers: They are widely available in supermarkets, usually right next to the bell peppers.

Onion and garlic: I'm lazy, so I use the food processor to chop the onion, and I frequently use jarred minced garlic.

Seasonings: I use kosher salt, dried oregano, and ground cumin. Make sure the spices are fresh! A stale spice can easily ruin a dish.

Shredded cooked chicken breast: You can also use shredded rotisserie chicken. Just make sure to remove the skin. Its texture won't work in this recipe.

Shredded cheeses: I use mozzarella and cheddar. You can experiment with other melty cheese. Fontina, asiago, and provolone will all work beautifully in this recipe.

Cilantro: Fresh cilantro adds a great flavor to this dish. If you don't like cilantro you can use parsley instead.

How to make stuffed poblano peppers? It's a surprisingly easy recipe. The detailed instructions are included in the recipe card below. Here's an overview of the steps:

You start by cooking tomatoes, onions, garlic and spices in olive oil.

Next, you remove the pan from the heat and mix in cooked shredded chicken and mozzarella.

Now, stuff the tasty chicken mixture into the poblanos and bake them in a broiler-safe pan.

The very last step is to sprinkle some cheddar cheese on top of the dish and broil just to melt the cheese.

Poblanos have a rich flavor, a meaty texture, and mild to medium heat. Three of us loved the extra heat. One of us - the one who's under twelve - said she would have preferred stuffed bell peppers instead.

If you're not fond of spicy foods, you can certainly use the same tasty chicken filling to stuff sweet bell peppers.

Can poblano peppers burn your hands?

Yes. Although they are fairly mild, they do contain capsaicin, which can be very irritating for some people. I recommend wearing gloves when handling poblano peppers.

Can you eat poblano peppers raw?

You can, but they taste much better when cooked. Cooking also softens their outer skin which can be quite fibrous.

You can serve stuffed poblano peppers as an appetizer, one per person. But I often serve two per person as our main course, with a simple side such as arugula salad or tomato salad.

If you'd like, you can serve them with toppings such as salsa, sour cream, or guacamole.

Keep leftovers in the fridge, in a sealed container, for 3-4 days. Reheat them in the microwave, covered, on 50% power, or in a 300°F oven. The leftovers are excellent, by the way. 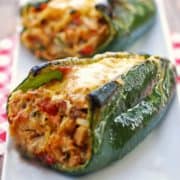 It's a good idea to wear gloves while handling poblano peppers to prevent chili pepper burn. If you don't like spicy food, you can make the same recipe with bell peppers.  In addition to oregano and cumin, I sometimes add smoked paprika to this dish. It's really good!
DISCLAIMERSMost of our recipes are low-carb (or keto) and gluten-free, but some are not. Please verify that a recipe fits your needs before using it. Recommended and linked products are not guaranteed to be gluten-free. Nutrition info is approximate and the carb count excludes sugar alcohols. Nutrition info may contain errors, so please verify it independently. Recipes may contain errors, so please use your common sense when following them. Please read our Terms of Use carefully before using any of our recipes.