Keto green bean casserole is made with fresh green beans and cheese. Onions and mushrooms add texture and flavor, and the tasty sauce is made with sour cream and Dijon mustard. It is wonderfully creamy and oh so delicious!

This tasty casserole is nothing like the recipe you might be familiar with, typically made with canned green beans, cream of mushroom soup, and commercial fried onions. So if you like the traditional recipe, perhaps this one is not the best fit for you.

But if you’re like me, not a fan of canned stuff but a big fan of fresh green beans and of topping your vegetables with cheese 🧀, then I think you are going to enjoy this version a lot.

Why this recipe works

This cheesy keto green bean casserole is made with fresh green beans, steamed until tender-crisp. None of those limp brownish canned beans! I also add onions and mushrooms, cooked in plenty of butter.

The easy sauce is made with sour cream, garlic and shredded cheese, and my secret ingredient – cayenne pepper – which adds just the right amount of heat and makes this dish so much more interesting.

The mixture is topped with shredded cheddar and – for crispness – with “panko” made from crushed pork rinds. Then I bake it until the cheese is melted and the casserole is heated through.

The result is a wonderfully flavorful casserole, made with non-processed ingredients.

Here's an overview of the ingredients you'll need to make this tasty casserole. The exact measurements are included in the recipe card below:

Sour cream: I tried using Greek yogurt and felt that it wasn't as good.

Dijon mustard: It's creamier and less vinegary than yellow mustard.

Minced garlic: Mince it yourself, or use the stuff that comes in a jar.

Kosher salt and black pepper: If using fine salt, you should reduce the amount you use.

Cayenne pepper: Just a little. It doesn't make the casserole spicy, it just adds an interesting layer of flavor.

Fresh green beans: I definitely encourage you to use fresh vegetables here, not frozen and definitely not canned. Canned green beans don't taste very good, in my opinion.

Butter: I use unsalted butter. You can use olive oil if you prefer.

Vegetables: Onions and mushrooms. I'm lazy, so I chop the onion in the food processor and I buy pre-sliced mushrooms.

Shredded cheddar: I use sharp cheddar. Sometimes even extra-sharp - it's so flavorful.

Crunchy topping: Pork rind “panko” - I buy it but you can also crush pork rinds in the food processor. You can also use almond meal, or simply skip this layer.

Here's an overview of the steps for making keto green bean casserole with cheese. The detailed instructions are listed in the recipe card below.

Make the sauce: Mix the sour cream with the Dijon, garlic, salt, pepper, and cayenne pepper.

Steam the green beans in the microwave. Cook them until they are tender-crisp. You don't want to overcook them.

Cook the onions and mushrooms in butter until soft.

Mix all the ingredients together (except for half the cheese and the pork rinds) and transfer to a baking dish.

Top the mixture with shredded cheese and with crushed pork rinds.

Bake until heated through and the cheese is melted, about 20 minutes at 400°F.

The pork panko is optional, and you can use almond meal instead, but I do like its flavor and crunch.

You can use the store-bought brand suggested below in the recipe card. Or make your own by placing pork rinds in a resealable bag and using a rolling pin to crush them. The food processor also works well to crush plain pork rinds into pork "breadcrumbs."

How do I prevent my green bean casserole from being watery?

That's the beauty of this recipe! Since it doesn't contain liquids such as mushroom soup or milk, there's no risk of it being watery, and there's no need for a thickener such as flour or cornstarch. The sauce here is based on sour cream, and as one would expect, it's exceptionally creamy.
I would say, however, that it's important to cook the mushrooms until they've released their liquids and the liquids have evaporated. Otherwise, the mushrooms will release liquid into the casserole.

How long do you bake a green bean casserole?

It largely depends on the recipe. In this recipe, I bake it for 20 minutes in a 400F oven. Keep in mind that the green beans and mushrooms are already cooked when they're placed in the oven, and we don't want to overcook them.

What crunchy topping can you use for a keto casserole?

I love using pork-rind "breadcrumbs." They are exceptionally flavorful, and since you can buy them pre-made, they are also very easy to use. While almond flour is certainly an option, it's not as tasty or as crunchy.

This tasty casserole can obviously be part of your Thanksgiving meal. But I actually like it enough to make it year-round. And since I bake it in a 400°F oven, I like to serve it with main dishes that I can bake in the same oven, such as:

You can keep the leftovers in the fridge, in an airtight container, for 3-4 days. The pork rind panko will lose its crispiness, but the casserole still tastes great when gently reheated in the microwave, covered, on 50% power. 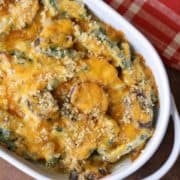 *Make sure to cook the mushrooms until they have released their liquids into the pan and the liquids have evaporated. You don't want them releasing their liquids into the casserole.  It's fine to double this recipe and bake it in a 9 X 13-inch baking dish. Even if you end up with leftovers, they taste great, as long as you reheat them very gently.
DISCLAIMER Most of our recipes are low-carb (or keto) and gluten-free, but some are not. Please verify that a recipe fits your needs before using it. Recommended and linked products are not guaranteed to be gluten-free. Nutrition info is approximate and may contain errors, so you should independently verify it. It is calculated using the SparkPeople.com recipe calculator and the carb count excludes sugar alcohols. Please read the disclaimers in our Terms of Use carefully before using any of our recipes.